What Percentage of Small Businesses Fail?

1. In the plethora of data released by Statistics Canada each year, two numbers loom that are of particular importance to small business people: about 145,000 new businesses start up each year in this country, and about 137,000 businesses declare bankruptcy each year. It isn’t hard to do the math; the ratio is almost one failure for each startup, and it begs the question: “How is it possible that entrepreneurship has so many casualties both in terms of money lost and lives often horribly upset?”
http://www.canadaone.com/ezine/sept99/business_success.html

6. “Data from Statistics New Zealand indicates that 53 percent of small to medium-sized enterprises (SME) fail within the first three years. Research suggests that two-thirds of business collapse is due to financial difficulties associated with poor financial management.”
http://www.westpac.co.nz/olcontent/olcontent.nsf/Content/25+February+2003

7. According to Dun & Bradstreet reports, “Businesses with fewer than 20 employees have only a 37% chance of surviving four years (of business) and only a 9% chance of surviving 10 years.” Restaurants only have a 20% chance of surviving 2 years. Of these failed business, only 10% of them close involuntarily due to bankruptcy and the remaining 90% close because the business was not successful, did not provide the level of income desired or was too much work for their efforts. The old adage, “People don’t plan to fail, they fail to plan” certainly holds true when it comes to small business success. The failure rate for new businesses seems to be around 70% to 80% in the first year and only about half of those who survive the first year will remain in business the next five years.

8. How many small businesses are there?
In 2003, there were approximately 23.7 million businesses in the United States, according to Office of Advocacy estimates. The Internal Revenue Service (IRS) estimates there were 27.0 million nonfarm business tax returns in 2003; however, this number may overestimate the number of firms, as one business can operate more than one taxable entity. IRS estimates the number of sole proprietorships (roughly equivalent to nonemployers) increased 2.4 percent in 2002 and is expected to increase 1.9 percent in 2003. Census data show there were 5.7 million firms with employees and 17.0 million without employees in 2001. Applying the sole proprietorship growth rates to the nonemployer figures and similar Department of Labor growth rates to the employer figures produces the 23.7 million figure. Small firms with less than 500 employees represent 99.7 percent of the 23.7 million businesses.

How many businesses open and close each year?
Estimates for businesses with employees indicate there were 572,900 new firms and 554,800 closures (both about 10 percent of the total) in 2003.
http://www.sba.gov/ADVO/stats/sbfaq.txt

9. What is the survival rate for new firms? Two-thirds of new employer firms survive at least two years, and about half survive at least four. Owners of about one-third of firms that closed said their firm was successful at closure. Major factors in a firm’s remaining open include an ample supply of capital, the fact that a firm is large enough to have employees, the owner’s education level, and the owner’s reason for starting the firm in the first place, such as freedom for family life or wanting to be one’s own boss. Business survival also varies by industry and demographics. The industry with the highest 1992-1996 survival rate for firms owned by white non-Hispanics was oil and gas extraction (82 percent survival rate over the four-year period). African Americans were most successful in legal services (79 percent), and Hispanic and Asian Americans in health services (66 percent and 76 percent, respectively). Sources: Business Success: Factors Leading to Surviving and Closing Successfully by Brian Headd, Center for Economic Studies, U.S. Bureau of the Census, Working Paper #CES-WP-01-01, January 2001; Advocacy-funded research by Richard J. Boden (Research Summary #204).

10. The developing countries of Asia and Latin America are far ahead of Europe in starting new businesses, according to a recent survey of global entrepreneurial activity. But few start-ups have the potential to make an impact on jobs and growth, and a negligible number benefit from venture capital, with the vast majority reliant on informal funding. The 2002 annual survey by the Global Entrepreneurship Monitor (GEM) was carried out across 37 countries representing 92% of world GDP. It finds that 286 million people, 12% of the workforce in these countries, are engaged in starting or running a new business, implying a global figure of about 460 million. “We were quite shocked by how high the index is in the developing countries,” admits Paul Reynolds, the GEM project co-ordinator. “Only now do we have a fuller understanding that half of the people in many developing countries are doing it out of necessity because they cannot find work, and that is what drives the rate up so high.”

What is the small business failure rate?

The table below shows the failure rate and survival rate of small businesses in the United States in 2020, examining businesses that were started in each of the years between 2010 and 2019. Businesses are most likely to fail in their first three years of operation. Our analysis found that businesses that make it to their fourth year have an approximately 90% (89%-91%) chance of surviving through each subsequent year.

What Industry Has the Highest Failure Rate?

What Industry Has the Lowest Failure Rate?

The Agriculture, Forestry, Fishing and Hunting industry has the lowest failure rate out of the industries surveyed. Only 12% of these businesses fail in the first year, while 20% fail by the third year. After five years, only 29% of these agricultural businesses fail.

States With the Highest and Lowest Small Business Failure Rates 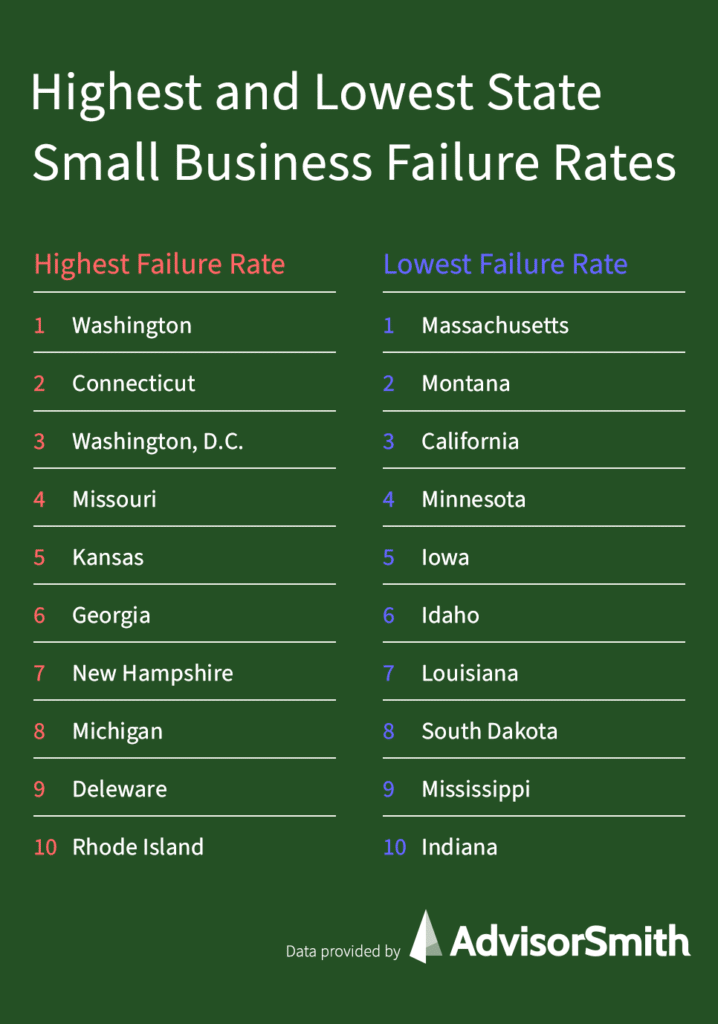 The business environment varies considerably in various geographic locations across the country. A large number of variables come into play when determining which states are more and less hospitable to small business owners and entrepreneurs. These factors can include state regulations, taxes, a state’s economy, the purchasing power of residents, among many other factors.

Washington was the state with the highest failure rates for small businesses. A nationwide high of 37% of businesses in the state did not survive their first year, while 44% failed within the first three years. Washington businesses failed 54% of the time by the fifth year in business.

In the table below, we rank all 50 states plus the District of Columbia based upon their small business failure rates over the past five years. States with lower failure rates are ranked first.

What percentage of small businesses fail in the first year? Тhe answer is 20%.

If you were wondering what percentage of small businesses fail within the first year, this stat is for you. They say it gets better with age, but that’s clearly not the case when it comes to small businesses. Even if you’ve been around for a while and think you’re well established in your niche, there’s a pretty good chance you might go under.

Popular reality TV series like Kitchen Nightmares will have you believe most restaurants inevitably fail in the absence of a celebrity chef’s magical intervention. However, the stats reveal that’s clearly not the case, even if Gordon Ramsay might find that hard to swallow (pun intended). In any event, I doubt he has the latest data on what percentage of new small businesses fail .